She’s the goth-goddess of tattooing and making an indelible mark on veganism too. Kat Von D talks to Teri Saccone… Yet success and fame have not extinguished the childlike enthusiasm she shows for everything she puts her focus towards. Von D’s energetic passion is infectious.

Despite her ubiquitous tats and smouldering goth-goddess style, Von D is open-hearted and emanates a positive energy while also seriously committed to her beliefs. This integrity is exemplified in Kat Von D Beauty. She is justifiably proud of the vegan, cruelty-free makeup for which she has not sacrificed glamour for ethics, as the products are all highly-pigmented, long-lasting and replete with a provocative edge you’d expect from her.

Born Katherine Von Drachenberg in Mexico to Argentinian parents, who were missionaries that relocated to southern California when Kat was a toddler. She and her two siblings undertook classical piano lessons from her grandmother at an early age. Her devotion to music remains rabid to this day.

VF&L pursued the busily productive Von D to get her take on some of our burning questions. We cornered her between a short European tour with musician/artist IAMX (Kat sang backup vocals) and the international re-launch of her makeup line, commemorating its tenth anniversary. She is both delightful and deep…

Animal rights is a driving force for me each and every day, and that includes the environment and human rights, too. I like to be a voice for the voiceless. And I totally love my cats! But I do try to inspire for change towards animals in my work.

On that topic, those principles remain at the forefront of your makeup…

Kat Von D Beauty is turning 10 years old, and from the beginning I refused to test on animals. We’re not owned by a corporation who tests on animals. I took my time getting registered with PETA and Leaping Bunny, but we did all of that. We don’t sell in China, because they insist all cosmetics be tested on animals. Despite it being a huge potential market for us over there I said ‘No. I won’t budge.’

Originally, all the products were not totally vegan. Soon after we launched we went through all the ingredients with a fine tooth-comb and replaced anything non-vegan with all vegan ingredients. We reformulated everything, which took time to claim the 100% vegan that we are and now will always be. How did you transition into your current plant-based lifestyle? Was it gradual or a sudden change, as you’ve been an animal lover forever?

I had been a vegetarian for many years, then about five or six years ago I went vegan after seeing the documentary Forks Over Knives and I’ve never looked back. It was not that hard to do as I’d not been eating animals for so long and then eliminating all animal products was a natural step. Obviously, the benefits of veganism are so worthwhile.

I’ve always considered myself an animal lover, and I think most people see themselves as that, too. When it comes to the suffering of animals, I think everyone’s a vegan deep down inside. We’ll always side with choosing non-suffering for anything – any living being. The hard part, I think for many, is seeing past the normalization of it. It’s easy for us to be okay with certain things because it’s normal and everyone’s doing it. I think it’s our job – it’s
our duty as human beings – to question that and do what’s right. I like to say that ‘veganism IS consciousness.’

What do you think would surprise people about you, who don’t know you or have not seen your TV shows?

Probably that I talk a lot, I’m goofy, clumsy and silly. People assume because I’m inked that I’m tough, but I’m so not. I wouldn’t hurt a fly.

When you have time, what hobbies do you like?

When I can relax I tend to do creative things, making stuff with my hands, gardening. (She has a black flower garden at her quirky, antique-crammed LA home.) I also like making music.

Yes, I love antiques of all kinds and I collect old bibles and books. They do contain leather and that pains me, but I won’t purchase any new item made from animals. My own three books were made to look like embossed leather. I won’t throw away my old leather books on an historic or waste-conscious level. You have a vegan shoe line launching this year and you also own a very diverse shoe collection, with more than 400 pairs…

I really adore shoes, some might call it an obsession, and I lost count of how many I’ve got. But I do wear everything that I own that actually fits. I bought a lot of them second hand on eBay. Plus, I can claim that having all those shoes helped me research for the upcoming line.

Did you develop a shoe obsession as a reaction to your childhood, as you grew up in a household of quite modest means?

Growing up I was actually a huge fan of Carmen Miranda (‘40s film star). She was responsible for introducing the platform shoe to America. I got a tattoo of her and then got inspired to start curating my wardrobe of platform shoes from that point on. Platform shoes are so sculptural and they make your feet look great. I’m so inspired by artists in general.

You began tattooing at the age of just 14 and then went on to become a celebrity in your 20s. What has fame taught you?

That no matter what project or business venture I’m involved in, it all goes back to tattooing. That’s my life. It all grows from that.

You have so many different projects on the go simultaneously, lots of responsibilities with your business ventures. How do you manage to keep on top of everything?

It’s all my grandma’s fault, she was a strict disciplinarian and we had to practice piano lessons two hours every day, despite wanting to be outside playing with other kids. It gave me the ability to always finish the projects I start. I’m sort of a workaholic, so I like to work, maybe a little too much. What philosophy would you say sums you up?

It’s kind of two fold: My philosophy is that self-confidence is a really magical thing. Since I’ve learnt to stop thinking too much about what others think, my art has improved. And the other thing is that at my core I’m all about love. Love is my higher power. Family is my strength. Art is my passion.

MY VIDEO IS OUT! I still can’t believe this happened! Just seemed like something in my head xD i’ll post some BTS soon and do a little write up about it all! For now, watch the video <3

Make sure to check out the rest of the Muse videos on Kat Von D Beauty Youtube!

This one is very dear to my heart as Ashley was the founder of my first fan club! Meant so much to me to include her in this campaign! Love you, Ash-Bear! 🖤

Kat von D has announced today that next 10 days she will be taking over the Kat von D Beauty Instagram to share with us her 10 Modern Day Muses. As you may know, she has done a campaign to launch her 10 year anniversary that showcases these 10 Modern Day Muses! The line launches May 5th!

Hey guys! I’m taking over the KvD Beauty Instagram for the next 10 days if that’s ok with you! Love, Kat 🖤

So make sure to follow Kat von D on Instagram and also YouTube for these video. Her first muse has been posted! So check out Adoring Kat von D for the video or Kat von D Beauty Youtube

I have posted some new photos of Kat and Leafar out March 30th, 2018

An interview Kat and Chris did with Soundsphere by Jay Sillence when performing overseas.

WHO THE FUCK IS KAT VON D?

these are the only official websites/social media of Kat von D. Although she does have a Tumblr she no longer uses it. Also, ask.fm has been denied as official. So if you see any “official” accounts other than listed here please email or tweet me and I’ll look into it 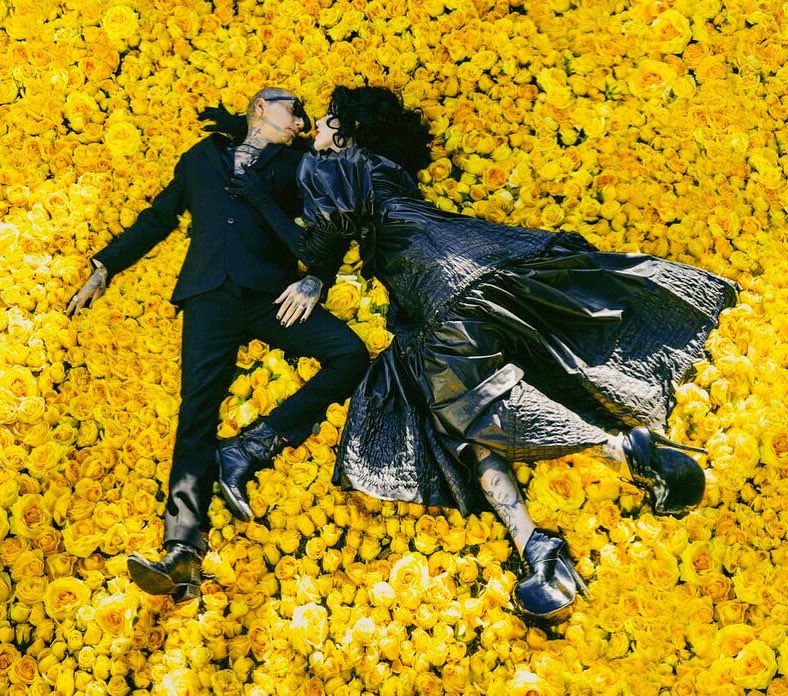 SONG OF THE MOMENT