No comments
by Lady Ashley

I LOVE this interview xD find out she is bit fussy too makes me think we are so much more alike lol check out the link below to win a KVD Lipstick!

From: Plant Based News
Kat Von D is an American tattoo artist, model, musician, entrepreneur, and television personality. She is best known for her work as a tattoo artist on the TLC reality television show LA Ink, which premiered in the United States on August 7, 2007, and ran for four seasons. She is also known for her vegan cosmetics line that launched in 2008. We spoke to Kat about animal rights, activism and cruelty free makeup products at the 2017 Animal Rights Conference in Washington DC

Welcome to Kat Von D Unlimited! Your one stop for all your Kat von D needs and desires. Bringing you news, updates, pictures, exclusives &
more since 2010! Hope you enjoy this UNOFFICIAL site made for you the fans!

WHO THE FUCK IS KAT VON D?

these are the only official websites/social media of Kat von D. Although she does have a Tumblr she no longer uses it. Also, ask.fm has been denied as official. So if you see any “official” accounts other than listed here please email or tweet me and I’ll look into it 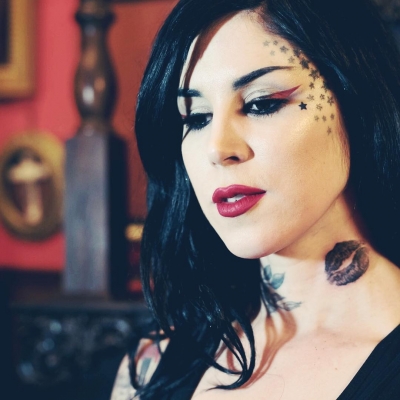 SONG OF THE MOMENT

© 2010-2018 Kat Von D Unlimited / Theme by Sin21 | Back to top | Homepage
Kat von D Unlimited is not an official fansite. Our site claims no credit for any images posted on this site unless stated otherwise. Images and information on this blog are copyright to their respectful owners. If there is any content appearing on this blog that belongs to you and do not wish for it appear on this site, please message us with a link to say which image and it will be promptly removed.
Translate »